karageko wrote: ↑Mon Jul 30, 2018 3:48 am I have no interest in seeing the movie either, but if I recall correctly even in the manga Alita has the most exaggerated and largest eyes compared to the rest of the cast? So this would actually be faithful to the source material if anything... It's been a while since I read the manga though, so maybe I'm forgetting other characters that contradict this.

I can understand not feeling it & skipping the movie tho.
*:･ﾟ･✧ Twitter ☆ The Anime Nostalgia Tumblr & Podcast ✧･ﾟ･:*
Top

That being said, if enough people I follow for anime/manga opinions come away with positive experiences then I'll probably watch it eventually. Certainly in no rush to do so though given my backlog of media.
Name: Austin
Twitter・Blog
Top

Know what, imma fly blind into this film, I'm not gonna see the new trailer so when I see the movie, I don't have any expecations going in. I'll see how long that last, but to me going in blind is going to help my attitude a bit. I'll probably like it more tbh. Yea i'll see this when it comes out, as I do about every anime adaptation in theaters.
https://web.archive.org/web/20090724043 ... points.gif
Top

The newest trailer along side all the interviews that've come out so far pretty much help you piece together the films general plot. Before the new trailer, I was unsure how they were gonna fit 4 different arcs into one film and whether it'd work well. Now that I have seen it, I definitely see how they're utilizing the arcs and I'm way more content with how they're doing it compared to what I thought they'd do prior. If I wasn't confident in the film before, I am now.


Tbh, GITS the live action film, while bland for the most part, was a sign of better things to come. After I saw the last half hour and how they sorta went meta for a moment, I realized we're finally entering an era where Directors are becoming more self aware of how life action anime films are perceived outside of Hollywood (which is a excellent imo). In essence, GITS was a step in the right direction. Not a good movie mind you, but a step none the less. (Also, as far as evidence of self awareness is concerned, the alterations between Alita trailers tells me that the director is aware of the feedback and is acknowledging it to some degree. This might be why it was delayed in the first place, both as to buy time for post-production work as well as trying to buy time for marketing purposes to max out potential audience).
Check out my anime YouTube channel:https://www.youtube.com/channel/UCoqEj7 ... hhVcLD_u1A
My Twitter page:https://twitter.com/script_weaver
Top

It does look like they've adjusted the eyes/faces a bit since the first trailer. 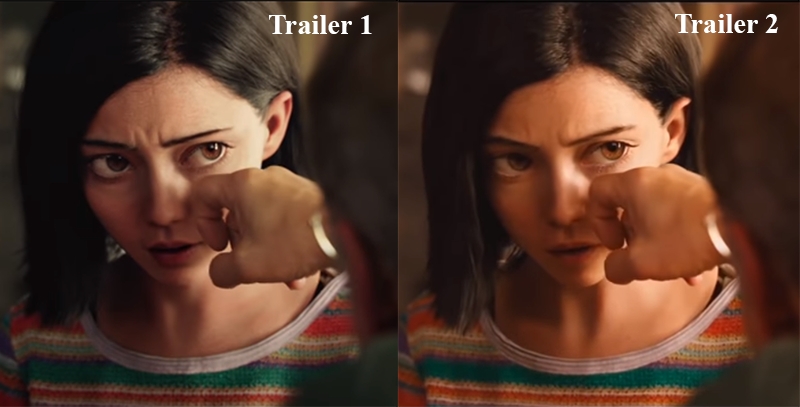