Rather keen for this - presumably following on from the Japanese tribute anthology that came out around the time of the live-action film, Kodansha are publishing an English language GitS book from Western creators in September. 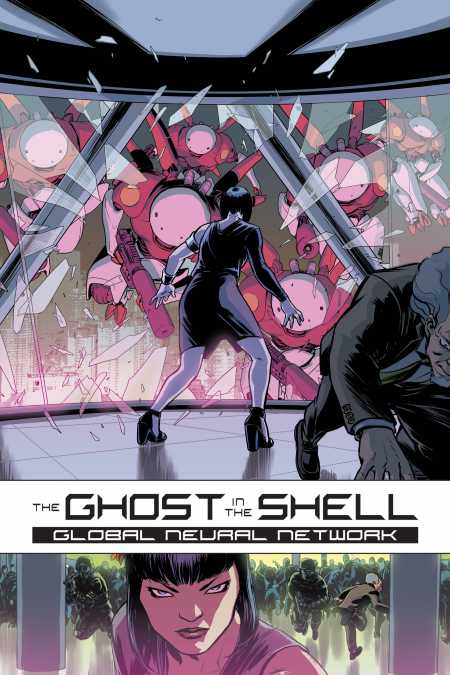 
"Four all-new stories take the cyberpunk classic The Ghost in the Shell to new frontiers in this full-color, hardcover collaboration between original creator Shirow Masamune and some of the world’s most innovative comics writers and artists. Featuring stories by Max Gladstone & David Lopez, Alex de Campi & Khoi Pham, Brenden Fletcher & LRNZ, and Genevieve Valentine & Giannis Milonogiannis, with illustrations by Becky Cloonan and more.

A crimelord exploits prisoners of war to run a remotely-controlled global strike force, and the investigation reunites Kusanagi with an old friend and pits them both against Chinese security forces. A family see their dead daughter on television, except she looks 15 years younger than she did when she died. The infiltration of anti-cyberization cult calls for Section 9’s most “human” members to abandon the support of their enhanced colleagues and do things the old-fashioned way. The stories in Global Neural Network bring a global, 21st-century persepctive to its questions of human identity and the border between mind and machine that made The Ghost in the Shell one of the most revered manga of all time, and unleash top Western comics artists on eye-popping action scenes starring Kusanagi, Batou, Togusa, Aramaki, and all the members of Section 9."

I'm particularly intrigued to see Giannis Milonogiannis's submission, as I know his art is very much inspired by the look of Shirow's manga in the 80s.

Re: Ghost in the Shell: Global Neural Network

I picked up this issue in this years Free Comic Book day stuff, I haven't had a chance to really read it yet. I'll be curious on how well it will do.
https://web.archive.org/web/20090724043 ... points.gif
Top

Re: Ghost in the Shell: Global Neural Network

Having acquired it as part of the Kodansha Humble Bundle, I had a look at Automatic Behavior, which I think is the story that would have been available for free comic book day.

It's fine. It doesn't bring anything new to the table, but it feels exactly like one of the self-contained episodes of SAC, which I imagine is exactly what they were going for. While David Lopez's character art doesn't appeal to me, he does manage to capture the right look for the setting in the scenery and the tech designs are very faithful to the distinctive look of Shirow's original. Cheekily, one character even turns up with Togusa's signature pistol, despite the man himself being notably absent.

I'd be interested to know what non-manga readers make of things like this. When they get western artists involved in a Japanese property, it seems like an effort to broaden their audience, but I feel like Shirow's work already had more crossover appeal than most.
Art Twitter for art things.
Top
Post Reply
3 posts • Page 1 of 1