Last anime to use hand-painted cels

Last anime to use hand-painted cels

I was curious about it, and turns out there is a clear-cut answer: It's Japan's longest running animated sitcom, Sazae-san. (With close to 7,900 episodes currently, it gives the Simpsons a run for their money) They officially stopped using cel animation for it in September 2013.
Here's a comparison of two shots - The left shot's of the first episode from 1969, and the right is from an episode 40 years later, aired in 2009.

But Sazae-san is an anomaly in the anime industry. Given they've churned out an episode (almost) every week for decades now, it makes sense that they'd keep with their existing methods longer than other shows would. "If it ain't broke, don't fix it" type of mentality.

So besides Sazae-san, are there any other shows that ran well into the 2000's with cel animation? If anyone knows of other hand-painted shows that stuck around, I'd like to hear them!
Top

Re: Last anime to use hand-painted cels

A friend of mine (Totally by coincidence, too) just sent this Twitter link discussing just this very subject, which adds another one to the pile; Astro Boy 2003!
https://twitter.com/JaredDiCarlo1/statu ... 5551166466 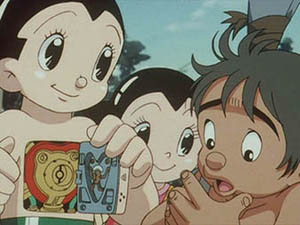 As culturally significant as Sazae-san is, this one's more my speed - The cels here are packed with detail, while still keeping true to what made those classic Astro Boy designs so appealing... And it looks great in-motion, too.

Once I get the time, I'll do some research and come up with a list of the last ~10 or so shows that used cel animation. Yeah, I'm basically answering my own thread prompt here, but hey... why not?
Top

Re: Last anime to use hand-painted cels

every time I see somebody say "the Simpsons is the longest running animated TV series of all time" it breaks my heart a little. Sazae-san is RIGHT THERE, people. Since 1969!
classic anime blog Let's Anime - Stupid Comics & more at Mister Kitty
Top
Post Reply
3 posts • Page 1 of 1